Vinyl in the Time of Covid-19 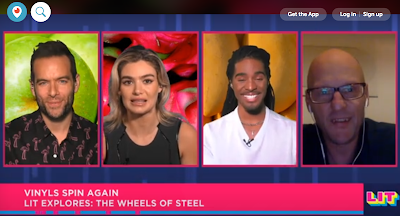 On Thursday I was interviewed on the fruity American television programme LIT Entertainment News about a turnaround: in America vinyl records are outperforming compact discs. Trade figures for the first half 2020 demonstrate that vinyl sales constituted 62 per cent of the revenues for physical formats. It was the first time since the 1980s that vinyl had generated more money than CDs.

This is something that had been predicted. Sales revenues for vinyl records have increased every year since 2006. Sales revenues for compact discs, in contrast, have declined annually since the millennium. When 2019's trading figures were announced it was predicted that, if trading patterns continued, vinyl would be on course to surpass CDs. Some people called this a long time ago. In my book Vinyl: A History of the Analogue Record, I quote the music journalist Adam Woods, who stated in 2004, ‘it is easy to believe that the format could thrive even as the CD begins to lose ground to the Internet’. I also have a 2011 quote from Lyor Cohen, who was then the CEO of the Warner Music Group, stating that ‘vinyl will definitely outlast CDs’.

It should be noted that vinyl is outperforming compact discs in terms of revenues but not in terms of units sold. One of the reasons why vinyl is generating more money is because each album typically costs two and a half times more than a CD. It is also the case that, in our time of lockdowns, it is more likely that consumers will purchase vinyl than CDs. The former format appeals to collectors and remains accessible via mail order. The latter format is more casually purchased and will be neglected in times of shop closures. Trade figures also indicate that the overall market for physical records is paltry. Vinyl accounts for four per cent of the American market. Streaming, on the other hand, accounts for 85 per cent.

Yet the figures are still remarkable. Vinyl looked on course for obliteration twenty years ago; it is now firmly established as a recording format that both consumers and the recording industry will invest in. Pressing plants have struggled to keep up with demand. Equally impressive is the fact that vinyl sales have continued to increase despite the strictures of Covid-19. In the United States they are up four per cent year-on-year. In the UK the trade magazine Music Week has reported that vinyl has defied ‘coronavirus chaos to post big rises’. Sales for the third quarter were up 41.4 per cent on 2019. This is largely due to the rescheduling of Record Store Day, but is demonstrative of the public’s commitment to this format.

After fifteen years of sales increases and a resolute performance in the face of coronavirus we should probably stop talking of vinyl’s revival. Instead, our focus should be elsewhere. The compact disc has been defeated. Will it now become an object of fetishism for collectors?