The Thin of It

Believe It, Chant It, Wear It

I visited Hull at the weekend. It is a great place and is highly deserving of its role as UK City of Culture 2017. Hull has a strong artistic history, it has an interesting contemporary network of artists and musicians, and it deserves a leg up.
Being there reminded me of a recent email conversation thread amongst the members of IASPM. The subject was football chants, in particular the many reuses of ‘Guantanemera’. The opening participant wanted to know how this song came to the attention of football fans.
The answer appears to be relatively straightforward. British fans probably adopted and adapted the song after hearing the 1966 hit recording by the Sandpipers. There have been many great variations on the theme. The most famous is probably ‘you’re only singing when you’re winning’, but my favourite mentioned by the respondents was a version sung by Spurs fans when Man City visited White Hart Lane in 2009. Liam Gallagher was in a corporate box. He stood up and made gestures at the home supporters. In response, they sang ‘you’re just a shit Chas and Dave’. Gallagher was unusually gracious. He applauded the Spurs fans and sat down.
My own contribution to the thread was to raise another point. Rather than considering how do songs become football chants, what we perhaps need to ask is why do some songs remain football chants. Football fans are always utilising hit records, but only a few of these will enter the canon of great chanting songs that are used by fans of all teams. A musicologist would be better placed than me to explain why, but it is clear that the successes need to have great tunes that have captured the public’s imagination and that they lend themselves to public singing. It also appears to work best if they have short phrases that can be sung in loops. Lyric settings are important too. The tunes that last tend to be adaptable to short phrases (usually fewer than 10 words, chanted over and over – no rhymes allowed!). They are also adaptable to different phrases: it is key that different fans can use different sets of words.
‘Guantanamera’ fulfils each of these criteria, taking its place alongside such hardy perennials as ‘Tom Hark’, ‘The Conga’, ‘Go West’, ‘Papa’s Got a Brand New Pigbag’ and the chimes of Big Ben. The repetitiveness of its original lyrics also serves as a guideline for the chanted adaptations.
And there is another reason for its success. The most memorable and impassioned singing at football matches usually comes from away fans. This is particularly the case when a small team is playing away to a big team, and comes into even greater focus when the away team is losing. The home team can be ahead in terms of the score line, but the away team can claim victory in terms of the passion and volume of the fans’ singing. ‘Guantanamera’, in its ‘you’re only singing when you’re winning’ incarnation, is perhaps the key song for this scenario.
Hull City have their own twist on this. The team is currently languishing in the relegation zone of the Premier League; they are underdogs even when they play at home. Their fans have come up with the most self-deprecating of ‘Guantanamera’ rewrites. This season they have been chanting ‘you’re only here for the culture’. It works particularly well when they are playing elite London teams. The phrase has become so popular that you can buy it on a t-shirt. What is more, it’s being sold by the official Hull City of Culture website, rather than by the football team. Culture eats football eats pop. 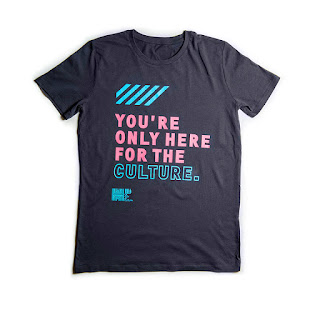