The song ‘Guantanamera’ achieved popularity rapidly and it has spread far and wide. On a more modest scale, the same thing is happening with some thoughts I raised about the numerous versions of the song that are sung by football fans. In September I pointed towards an article written by Katia Chornik for the Spanish BBC website that drew upon comments that I made in an email conversation thread and which also formed a blog entry. Yesterday, Katia had another article published about the song. This one appears in the Economist and it too features some of my thoughts.
My basic thesis about why some songs become and remain football chants remains the same: ‘Songs must have a great tune that has captured the public’s imagination and that they lend themselves to public singing. What is also important is how songs lend themselves to lyrics. The ones that achieve traction tend to be adaptable to short phrases’.
However, what is true about adaptive football chants – the songs that are used by fans of numerous teams – is less true about club theme songs. These can have more extensive and less pliable lyrics. Think of ‘You’ll Never Walk Alone’, which is sung by Liverpool fans fairly straight. The team that I support, West Bromwich Albion, has a slightly adapted version of Psalm 23 as its theme. Legend has it that it was adopted at a Sunday fixture in the 1970s (when games played on a Sunday were not the norm) and a hymn sheet was found on the terraces. West Brom fans always sing the words in the same way and they are not taken up and adapted by fans of other teams.
Earlier this year I came across another inviolate theme song. West Brom were playing away at the Olympic Stadium in London. As I walked around the ground I found some curiously downbeat words inscribed on the entry doors. First up was the phrase ‘Fortune’s always hiding’. The next doors had ‘Then like my dreams they fade and die’. After reading this, I felt confident that my team would beat the home side, West Ham. It was only with the next words’ ‘They fly so high, nearly reach the sky’ that I realized I was reading ‘I’m Forever Blowing Bubbles’, the club’s theme, backwards. That said, the song isn’t any more positive the right way around. When heard at matches, however, its lilting communal refrain disguises the pessimism of the verse. Moreover, as it is a song that has not been adopted by other clubs, most outsiders only know the title lines anyway, which can appear to be about childish wonder rather than perishable dreams. Still, it says something about the realism of West Ham that they don’t shy away from its true sentiment.
The club’s fans have been singing ‘I’m Forever Blowing Bubbles’ since the 1920s. It was first adopted in honour of their player Billy J. ‘Bubbles’ Murray, who bore a resemblance to the famous Pears’ Soap advert of the time. The World Cup started yesterday. How many dreams will have faded and died by the end? 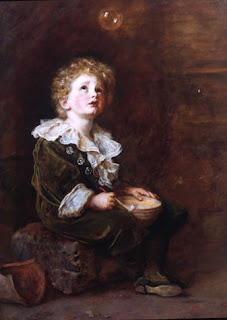 Posted by Richard Osborne at 07:44 No comments: