It’s now ten years since Ray Charles died. To mark this occasion Robert Elms asked listeners to his BBC London radio programme to request and talk about their favourite Ray Charles songs. I relished this half an hour of music. The first song chosen was ‘What’d I Say’, which is a good a piece of dance music as has ever been recorded. The second was ‘Georgia on My Mind’, which as a ballad is equally as good. In fact, when he’s at his peak, it’s hard to think of anyone who can equal Ray Charles.
Charles was probably the first popular musician to be labelled a genius. He was also the one to whom the term was most consistently applied (check out those late 1950s/early 1960s LP titles). But where did his genius lie? To paraphrase Bob Dylan, whatever it was that Charles did, it wasn’t in the songwriting.
Charles did write ‘What’d I Say’, but for all its innovative brilliance, the track remains bedded in the traditional 12-bar blues form. He didn’t write ‘Georgia on My Mind’, or ‘Mess Around’, or ‘Drown in My Own Tears’, or ‘Let the Good Times Roll’, or ‘Hit the Road Jack’, or ‘I Can’t Stop Loving You’. Some songs for which he did gain a writing credit, such as ‘I Got a Woman’, are really old songs reworked.
But what reworking! It’s in his skills as an arranger that Ray Charles’s genius lies: his bringing together of different musical traditions and his ability to get a band to explore their twists and turns. It’s also in his interpretative abilities as a singer: the timbre, timing and nuances of his voice. It’s also in his abilities as a keyboard player; the way that he gets a band to swing together; the interaction that he has with his backing singers, the Raelettes.
Digital technology has encroached upon the areas in which Ray Charles excelled. The majority of today’s pop musicians arrange blocks of information on computer screens, rather than arrange charts for performing musicians. Sequencing and quantizing have taken the place of the ability to interact with a band (or to interact ‘live’ with a backing track, for that matter). The precision of autotune has replaced the grain of the voice. Artists gain their reputations for their production techniques, rather than for their musicianship skills. Moreover, when these artists play live, they remain subject to computerization. Even when their performances are not digitally controlled, they have to play with the rhythmic precision of a sequencer, or sing with the range and accuracy of an electronic device. The writing and the recording of their songs dictates this.
I don’t want to argue that these technical innovations are bad or that great music is no longer produced. I would also like to underline the fact that the techniques that Ray Charles employed were also the results of technology; as with today’s hits, his recordings were shaped by the latest developments in instrument design, studio equipment, and microphone techniques.
What I would suggest, however, is that digital audio workstations put more pressure on artists to make a mark with their songwriting. Older records are as likely to make their presence felt through ‘feel’ as they are through their chord changes or harmonic twists. Today’s music is more rigid and compressed. New artists aren’t musicians foremost; their main occupation is as composers and editors.
What are the effects of this? In the first instance, I would argue that it shifts the conception of popular music ‘genius’ so that it is now more in line with other art forms. It is the act of writing that is valued, rather than the life that is captured the tracks (I will explore the pros and cons of this in a later blog entry). Secondly, I would argue that it is now harder to create great pop music. Being a writer is not easy. Being Ray Charles wasn’t easy either, but in the past there were many brilliant records that didn’t have great writing, great musicianship or great arranging. They just had a great something. In his book This is Uncool: The 500 Greatest Singles Since Punk and Disco, Gary Mulholland outlines his ‘own personal Theory One of pop’. This is that ‘Everybody has one good single in them’. It’s my personal theory that it was the quirky magic of analogue recording that made this the case. A great digital audio workstation composition cannot be stumbled across in the same way. And so, for all the supposed democracy and opened access of computer-based music making, it actually makes pop music more elite.

Posted by Richard Osborne at 08:43 No comments:

Vinyl: A History of the Analogue Record now in Paperback

The paperback version of my book, Vinyl: A History of the Analogue Record, is now available. The publishers, Ashgate, are selling it for $31.46 on their American website and £16.19 on their rest of the world website, making it more affordable than the hardback version. The paperback has a new preface and new, full-colour sleeve. There’s also an interview with me about the paperback, which can be found on the Ashgate blog. 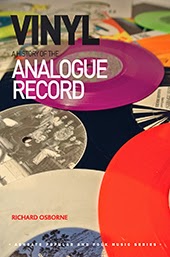 Posted by Richard Osborne at 08:38 No comments: