Streaming income is not calculated in the same manner as physical sales income, yet the record industry presents it as such. In its market reporting, the industry lumps together the wholesale revenue from CD and vinyl sales with the money it receives from streaming and downloading companies to present an overall picture of industry wellbeing. This is misleading, as the revenue from physical sales income includes costs that are absent from streams. The former is provided as a gross revenue figure and the latter details net revenue.
In addition, record companies have utilised the wholesale price of physical sales and the revenue received from streaming companies as the basis of their royalty per unit splits with artists. This is also misleading, as 20% of the wholesale revenue of a physical format represents a greater share of profits than 20% of streaming income. In the digital environment many artists are being left out of pocket.
Let’s do the maths. The percentage splits that make up the wholesale price of a physical release can be broken down as follows:
Record company 45.5%
Artist 20%
Manufacturer 14%
Distributor 12%
Songwriting copyright 8.5%
Amongst these divisions, the record company and artist shares are proportioned 70/30.
In contrast, when a record company receives a payment from a streaming company they do not have to pay a manufacturer (because there is no manufacturer), or a distributor (because the streaming company, which is the de facto distributor in this instance, has retained its share of the revenue before dividing the remainder between the rights holders), or the songwriting copyright (because this has been paid by the streaming company). The record company still has plenty of overheads and expenses, but out of the categories listed above for physical sales, it only has to pay the artist. This means that a 20% royalty deal for streaming results in a split of income between record company and artist of 80/20.
It is natural, therefore, that artists demand increased royalty rates for the money generated by streams. The rate should rise by at least 50% over their physical royalty rate, given the ratios presented here. And it could be argued that they should rise further than this, as the streaming company is taking over some of the record company’s traditional duties when it comes to the marketing and promotion of the music.
Many artists are achieving higher royalty rates for streaming. Music Business Worldwide recently reported that several ‘superstar’ performers are negotiating 50/50 royalty splits with their labels for streaming income, and that the ‘traditional’ deal, whereby a 20% royalty is applied to both physical sales and streaming is ‘fast becoming obsolete’. This obsolescence probably only applies to new deals, however. There are plenty of artists whose contracts are long-standing. These contracts will not mention streaming directly. As a result, record companies have commonly argued that they entail the same royalty split for streaming as the artist receives for record sales.
While the vagaries and disappointments of streaming royalties have received plenty of attention, the reporting of industry figures has not. It would nevertheless appear that here too the recording industry has played an advantageous mathematical game. If the revenue figures for physical and streaming/downloading are to be properly equated and combined, then costs that are currently included in the physical sales reporting – manufacture/distribution/songwriting copyright – should be removed. Combined, these costs would reduce the total physical sales figures by 34.5%
And what sort of picture would emerge? Well, there has long been a tendency by the recording industry to report the revenue from digital as being inferior to the profits it previously gained from physical sales. There is truth in this, but the picture is not as bleak as the industry has presented. Moreover, they have used their own representation of the balance between physical and digital revenue to drive hard bargains with streaming and downloading companies. The record labels have insisted on a 50+% share of overall revenue, but they obscure the fact that they are retaining an 80% share of these proceeds, whereas their revenue share from the wholesale price of a physical sale is just 45.5%. Nice numbers if you can get them.
Digital has provided a larger proportion of record industry income than has been represented by the recording industry’s own trade bodies. In the UK, the BPI has indicated that the combined money derived from downloads and streams only overtook physical income in 2014. However, if we remove the 34.5% costs that are present in their physical sales reporting but absent from digital, we find that this balance was tipped in 2012. Regarding last year’s figures, the BPI has reported that the split between digital and physical is 62/38. If we again remove the 34.5% costs that are exclusive to physical, the split is in fact 71/29. More fundamentally, if we take the figures as BPI represents them, the 2017 recording industry only generated 42% of the income that it was making in 2001. If we adjust for costs, then it generated 64% of the income it was making in 2001. It is healthier than it makes itself out to be.
The difference that removing manufacturing, distribution and songwriting copyright costs from physical sales reporting can be witnessed in the tables below. First, we see the figures as BPI reports them but adjusted for inflation: 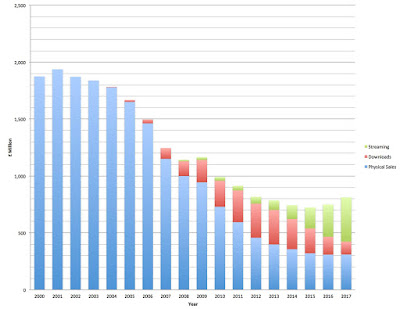 Now, here are the same figures, but with the 34.5% physical recording costs removed: 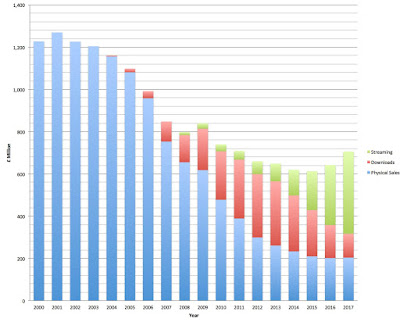 In his introduction to the 2017 record industry figures, Geoff Taylor, the chief executive of BPI, waxes positive about streaming revenue. Despite this, he makes a point of warning that ‘the music industry still has a long way to go if it is to recover fully’. As a result, his organisation wants to squeeze yet more money out of the streaming companies, most notably YouTube, which they argue has taken advantage of safe harbour provisions, resulting in a ‘value gap’. Taylor reprimands this company because they do not ‘pay fairly for their use of music’. Yet while he highlights this particular value gap, he ignores the one that the record industry has created. There is a significant chasm in the way that they report and utilise the figures for physical sales and streams.
Posted by Richard Osborne at 14:40 No comments:

The Production of Silence

At the beginning of this month I attended the latest UK and Ireland IASPM conference, which took place at the University of Huddersfield. I spoke about silent records, a subject I’ve toyed with since 2012. In that year, the Hayward Gallery put on a show of ‘Invisible Art’ in which they displayed blank canvasses and empty plinths. Invisible art is obviously akin to silent music. The Hayward’s director, Ralph Ruggoff, nevertheless argued that fine art presents a richer field. Publicising his show, he declared that ‘in music you only have one piece of silent music but somehow in art, artists keep coming back to the subject’.
This made me think, ‘hold on!’ There is clearly a dominant silent composition within art music, John Cage’s 4’33”. However, while this composition has cornered the market in notated muteness, there are many recorded silences. What is more, these recorded silences have diverse stories to tell. Some of them nod towards Cage, but others speak silently about censorship, another tranche offers memorial silence, there are silences that reveal the specificities of recording formats, and there are silences that comment upon the economics of record production.
My first response to Rugoff was to draw up a top ten of silent recordings for the New Statesman. More recently, I published a chapter detailing ‘Six Types of Silence’ in the collection Critical Approaches to the Production of Music and Sound. My talk at Huddersfield offered an abbreviated version of this work. You can read it here.

Posted by Richard Osborne at 11:06 No comments: